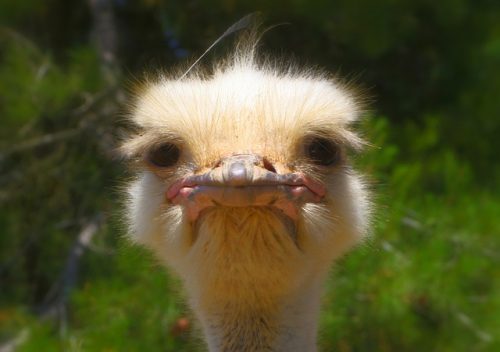 How often do we hear that someone is offended these days? Offence is taken over something said about religion. Or about abortion or any other controversial topic. Name your favourite. It is here we run into freedom of speech issues. Where is the boundary of what is acceptable to say? Perhaps this is a fitting topic for the Aquarius time of year, particularly as we have just had an eclipse which also highlights the opposite sign – or shadow side – Leo. Signs opposite each other always have connections, and one of the areas where I think this duo operates is in ‘offending’ and ‘offended’ territory.

Aquarians can be notoriously keen on having rights – ‘It’s my right to be able to say anything I like’. Especially about what we think, as we Aquarians are thinkers at heart, not feelers – although in our defence, we do have other parts! But being too much in our heads, or too logical, can come across as cold and uncompassionate. Offensive even.

On the other side, when Leos turn bad, they can see themselves as the most important people alive, and they can be easily offended. Pride is hurt. It is something that is taken personally, as of course – ‘everything is about me’.

The polarity of Leo/Aquarius is about the personal vs. the group. It is often that  by belonging to a group, we have permission to take offence. There is safety in numbers and it is wise to support other members. If we think a member might see a given opinion as a personal affront, we take offence on their behalf. Perhaps instead of owning the pain on a personal level.

But if we really are to have freedom of speech, for which so many fight, we always run the risk of someone being offended. I’ve no doubt that if I voiced many of my opinions, there would be people who would indeed take offence. I experienced this a few years back when, expressing my sense of humour in one of my posts, I called myself a ‘Facebook slut’ for saying yes to nearly everyone who asks to be my friend! And I posted this image to go with this comment. 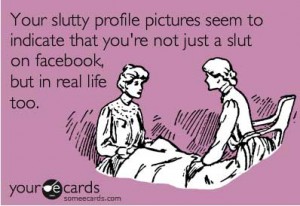 Here are a few comments from one reader:

“This image – it’s slut shaming. Why is it your business to judge a woman for choosing and having a promiscuous image? Can you see the condescending nature of the image?  Personally it makes me sad that even older women like yourself get a laugh out of slut-shaming images like this one.”

So much for my sense of humour! I was a bit surprised, but not offended, by this – although I guess I could have taken offence at the last sentence. I found it amusing, especially because of the clothes in the image and that this happened on a Leo post.

But the operative word here is ‘take’. We choose to be offended. It happens when our world view is threatened by a different voice. Being offended can be an excuse for something else. I don’t think my reader was sad. That’s not what I read into her comments, but perhaps I am mistaken. She took offence at a comment, or in this case an image, over an issue close to her heart. It touched a nerve. But my comment was not addressed to anyone personally (except maybe myself!). And just for the record I don’t care what people put on their FB profiles.

A lot of what we hear now is about a group being offended – women, as in the case above, or the transgender community or a particular race or country or … But I think there is a difference between this type of being offended and when we get insulted personally. My opinion of controversial speakers being barred on campus because they might cause offence, is that it is ridiculous. Hopefully students in a group are strong enough to hear others’ opinions. Nothing will happen to them if they hear an opinion different from their own. In fact, it could help form counter-arguments. Difficult opinions should be discussed – especially in universities, in my view. Political correctness can go too far. This is probably an Aquarian argument. Unfortunately it’s often security issues that cause speakers to be uninvited. However that is a different issue. But there are still attempts to ban speakers – Jordan Peterson, who has been in the news, is a case in point – more on him in a minute.

If the insult is personal – an opinion on your size, clothes, politics or … and is directed at you personally, then to me this is different. But offended is a funny word to use. We are, and probably should be, hurt or angry or upset. Or we might simply disagree. We feel an emotion. ‘Offended’ feels like a bit of a cop out that attempts to put the blame on the other person. It feels like an Aquarian word – one that seeks to avoid a feeling! One that makes us right – another Aquarius theme. If someone is happy in their own skin and gets this sort of comment then they know it is just an opinion. But of course, when the intention is to upset, many know how to find our weak spots and that makes it more difficult to handle.

The #metoo campaign highlights this ‘offended’ dilemma. Of course women have been abused and hurt in the patriarchal culture. Rape or unwanted sexual attention is never acceptable, and these men (and women, by the way, as many boys have been sexually abused by women) should be brought to justice. But I think many women are using this as an excuse to get back at men. They are playing the ‘offended’ card to stop men being heard. And yes – we should have our say – but some of the things I have heard from women’s mouths I’m afraid make me think,  ‘Get over yourself.’ Nothing actually happened in many cases – women just need to tell men to shut up and go away – and yes, we need to learn how to do that. But we shouldn’t blame men for that. We are in danger of trying to ban flirting, and that would be a shame!

Which brings me to Jordan

There has been lots of discussion, trolling and hype around Jordan Peterson, who is a Canadian clinical psychologist, cultural critic, and professor of psychology at the University of Toronto. Recently he was interviewed by Cathy Newman on Channel 4 in the UK, after which all hell broke loose on the forums.

I’m not sure who received the most trolling, but the whole thing is a good example of the Aquarian/Leo duo and ‘offending’ debate and how this can be hijacked by different groups. Peterson has alt-right followers and is therefore being called alt-right himself, which he most definitely isn’t.  Some of the other opinions of him include pseudoscience, (where have I heard that before?) irrational and full of shit. 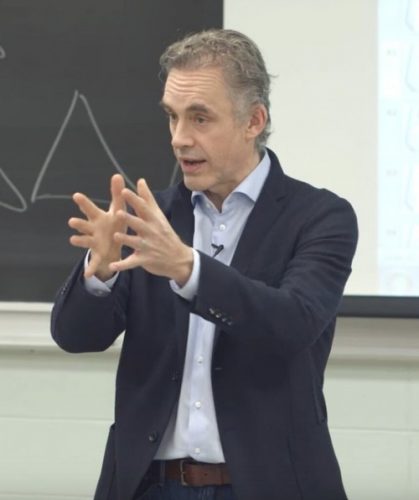 Newman was attacked by Jordan’s followers, and it is thought that the rest of the misogynistic trolling levelled at her is linked to the backlash from #metoo. That could be true. There needs to be a balance on this and men and women need to stop hurling insults, and being offended and offensive, and talk to each other. The Leo side is too proud. The Aquarian, too cold and righteous.

I have given several links below if you are interested in this story – there are several sides! I feel sorry for both of them. Jordan is often misunderstood and taken out of context, and Cathy was probably asked to do this sort of combative interview, but I do agree with some who said it was a terrible interview from her side. I shouted several times at her: ‘He didn’t say that!’ It was a pity, as to roughly quote Jordan, “When she dropped her guard we could have had a real conversation.” I think that’s right – the sensational nature of media is spoiling what could be interesting topics.

When I heard this interview, I thought Peterson must be an Aquarian – he’s so logical and mental. But I was wrong – he’s a Gemini. Still … an air sign. My feeling was right in a way though, as he has what I call a talent aspect (a quintile, astrologers!) between Mercury – how we communicate – and Uranus (a kind of Aquarian thinker), making him someone who is a brilliant thinker and perhaps ahead of his time. He is, therefore, liable to be misunderstood, particularly when taking on sensitive subjects, because when someone has such steely logic on say, gender issues – as in the case of the interview –  it can trigger an emotional backlash. One article headline (link below) asked “Why can’t people hear what Jordan Peterson is saying?” I must admit to having wondered this myself!

The rest of his communication style in the chart shows the presence of the Jupiter, Saturn and Pluto archetypes. I suspect he doesn’t mind being right, pontificating, and winning any argument. As he said, he chooses his words very carefully. A brilliant if rigid thinker, I would guess. 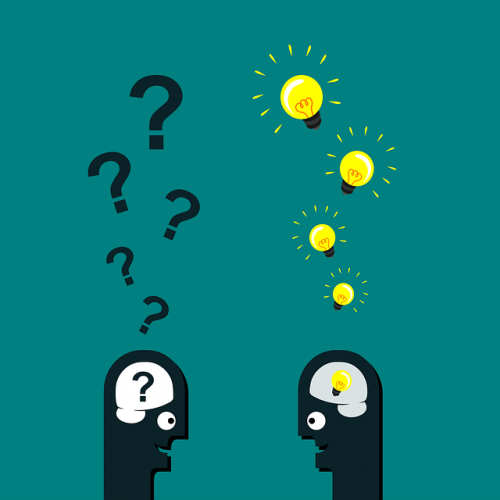 Cathy Newman, on the other hand, is a defender of women’s rights. She too has the Saturn and Pluto archetypes present in her communication style, so she could also be a rigid, authoritative thinker who likes to win. I think she really could do a great interview (shame on Channel 4). However, her base thinking is not logical, it’s emotional Cancer, a protector of women and children. These two are chalk and cheese in the way they think. Cathy has Mars in the sign of Leo, so her approach to interviewing might be personal – she may well have taken Peterson’s book – ’12 Rules for Life: An Antidote to Chaos’ – as a personal affront to women. The book certainly asks some hard questions, which, to my mind, need to be discussed if we are to move out of ‘offended-offending’ territory.

By using astrology, it is possible to combine two charts to see what constellates. In the Cathy-Jordan case this shows an explosive mix on the communication front. Their joint Mercury is in Gemini, so they probably enjoyed a good verbal tussle, as Cathy suggested. But Mercury also picks up other vibes – such as Mars – a confrontation or provocation; Saturn – who has the authority?; Uranus – a kind of ‘No, I’m right’; Pluto – a quote from Jordan “I got you” – a power play; and Neptune – on another wavelength? It is interesting to see this in action. Everyone has the Leo-Aquarius axis in their horoscope, but of course it will be stronger if you have planets in these signs. Perhaps it’s a good time to discover how you get offended – or if you don’t …  here’s some help!

This is J P Sears. A good link on this topic (see below) also posted this video, which is how I found this one. However, I have seen many of Sear’s other videos. He is a healing coach whose videos have become very popular.

Quite a few this month just in case you are interested in the various views on the interview, so you can judge for yourself.

An article containing the original interview: How dangerous is Jordan B Peterson, the rightwing professor who ‘hit a hornets’ nest’?

On the #metoo backlash

And the one on Why Can’t People Hear what Jordan Peterson is saying?

Banning people like Jordan Peterson from causing offence – that’s the road to dystopia by the Guardian’s Matthew d’Ancona.

An article on the book with his 12 rules.

A good article on being offended by Shawn Whatley.

“I’m not offended by all the dumb blonde jokes because I know I’m not dumb… and I also know that I’m not blonde.” Dolly Parton.