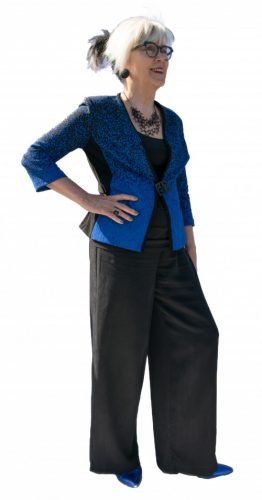 Photo of Faye by Katell Chevalier

Faye has a business background in Management, Information Technology, Training and Consultancy.

After finishing university in Auckland, New Zealand, she started first as a computer programmer at the Auckland Hospital Board and later moved to Systems Support at what was then ICL (NZ). Once there, she progressed on a path that led her through Systems Analysis, running training, managing a Customer Centre for implementing entire new systems for clients, and finally sales. While at ICL she also implemented systems and gave training in Fiji and studied support systems in Australia and South Africa so that new systems could be introduced into New Zealand.

On leaving New Zealand she was based in London where she worked on a sales project for ICL New Zealand and then became self-employed, operating as an ICT consultant based in London. Her clients included BP, where she was involved in setting up the first E-mail systems and training managers to use them. At Prudential Life, she was a systems analyst.

In 1986 Faye moved to her current location, the city of Amsterdam. Her initial work was as Training Manager for a Computer Consultancy company, DCE.  In this position she also arranged courses and led the direct marketing of training programs.

Upon leaving DCE in 1992, Faye trained as a therapist and decided to follow her true passion of becoming a full time astrologer. Occasionally she was tempted to do projects in ICT again as she was part of the management team of BIZZO, a consultancy company. Faye was responsible for the finance and general management of this company and while there her projects included Project Management in Anglian Water in Cambridge and Lincoln (UK),  and for the Register Amsterdam, which is the part of the Amsterdam Council which registers births, deaths and marriages. She also acted as a consultant in the Government Body, Verkeer en Waterstaat, (the Ministry of Transport), where she was involved in contracts for setting up a new agency.

During her time as a freelance consultant, Faye had of course been using astrology privately for both business and private clients. In 2006 she decided to merge the two streams and started up her own company juxtaposition, a consultancy company that uses astrology in business. Just before doing this she completed her Master of Arts degree in Bath in the UK. She was one of the first graduates of the Cultural Astronomy and Astrology MA programme.  Her dissertation included research on KLM, C&A and Martinair and offers an organisational development model for companies. For more information on this see The Cycles of  History.

Of course coaching (although Faye would like to find a new term for this!) within companies also forms part of her work.

She is often asked to give her vision on the future. An example in Dutch from 2005 was about pensions in the year 2030.

One of Faye’s pioneering uses of astrology is corporate and personal branding. She is the founder of Strut Your Stuff, which helps you find partners for design, text-writing and website building. Faye does the first step – a brand profile.