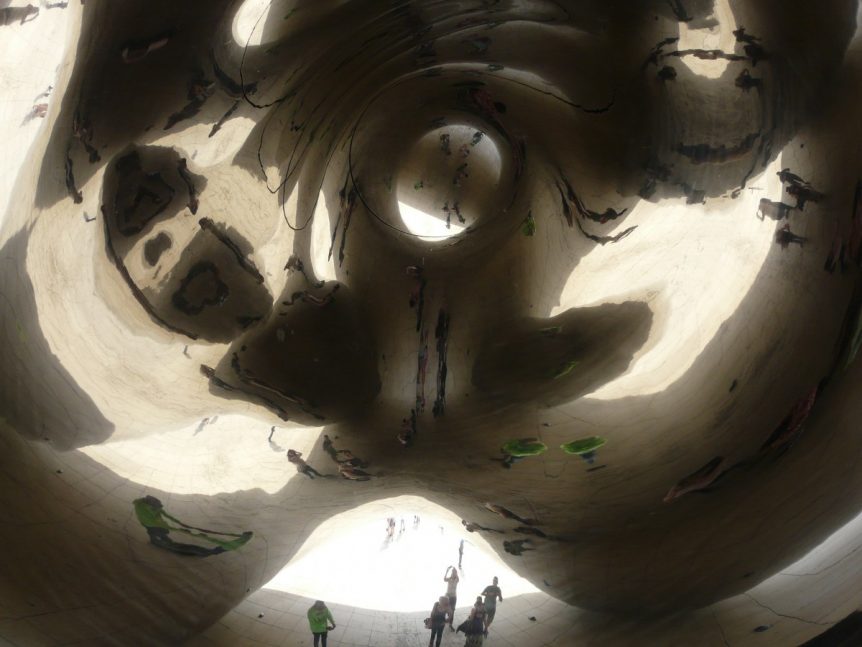 Typical of Gemini, it has been a very busy month of networking, meeting friends and talking (although sadly –  because I was planning more of it – not so much writing) for me. My trip to the US is now a memory full of impressions, scenery, people and especially stories, both wonderful and downright scary. Unusually for me, there were always people around me – firstly sharing a room at the huge UAC astrology conference in Chicago, then being a guest in Portland (more work) and then on the road with good friends visiting Crater Lake, Ashland and Eugene before returning home. Lots of exchanges of ideas. I love my work, but this final week was, at last, a holiday!

The very beautiful Crater Lake – my phone takes surprisingly good panoramas I discovered! So … finally a worthy subject to use it on. Yes the white stuff is snow!

I had my own ideas about the US, based on previous visits, the news, and things I read which, unsurprisingly, agree with what I already thought – I wrote about filter bubbles back in 2015. Chicago was new territory for me, and I was really looking forward to going there. I had seen the BBC’s Miriam’s Big American Adventure, (link below for the Chicago part), so I knew it was a divided city of rich and poor. Staying in the Magnificent Mile gave me a view of one side. This part of Chicago is beautiful and was surprisingly full of tulips! The lake, the architecture and the fun people made me fall in love with the city. 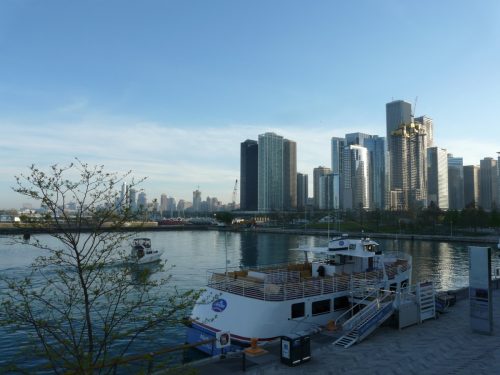 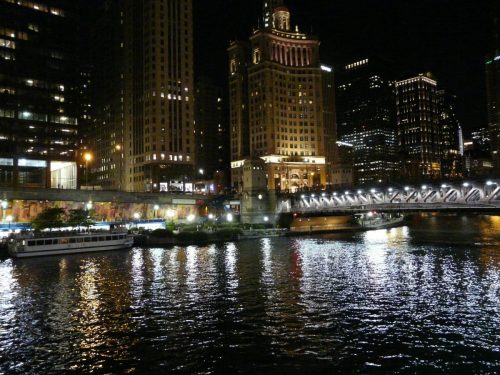 But, as shown in Miriam’s documentary, there is another side to Chicago and the US. By using public transport, which I always like to do to avoid getting a lopsided view of places, I was confronted with stories of a different kind. A young man on the metro, suffering severely from the effects of diabetes, was begging for money for insulin so he could save his legs and eyes. Knowing from the media about how bad the healthcare system is, and seeing the consequences of it, are two entirely different things. I found it very confronting, especially as he was being ignored by everyone. It is so sad and downright inhumane and wrong in such a wealthy country. 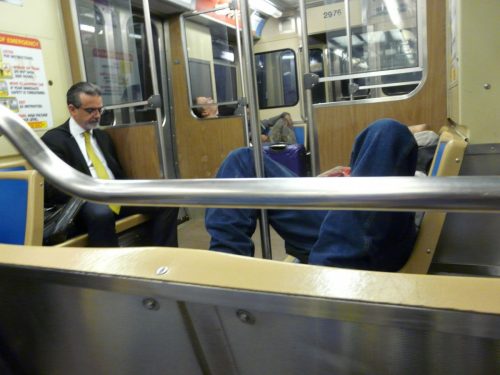 Glad there were extra seats! 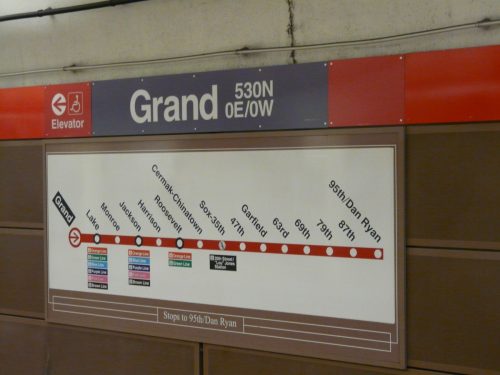 Yes it was grand around Grand

Part of the goal of this trip was to tell my own stories – mainly about my work on Ceres. At the huge UAC conference (around 1500 people attended – a real gathering of the clan), I told stories of two women with ‘terminal’ cancer, who are now better, and suggested how astrologers could use Ceres, the dwarf planet, to help people to heal by understanding epigenetics and suggesting supportive environments. I told stories of how we can use astrology to make brands – for ourselves and companies, and in Portland I used Ceres to tell the story of the life cycle of women. I hope these stories were of practical help to astrologers and others alike. 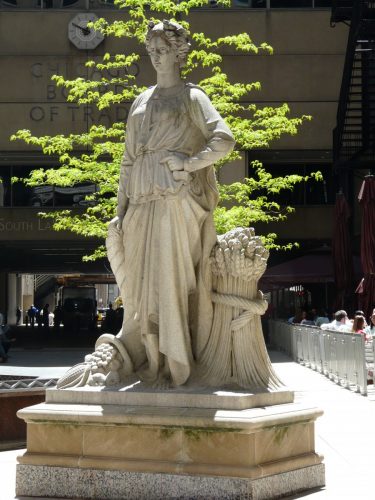 Ceres outside the Chicago Board of Trade building. She is the goddess of, among other things, abundance. 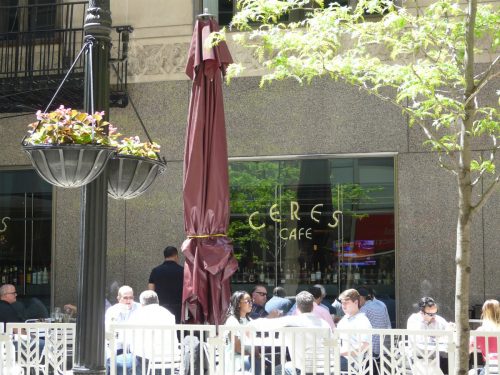 The cafe in the Chicago Board of Trade 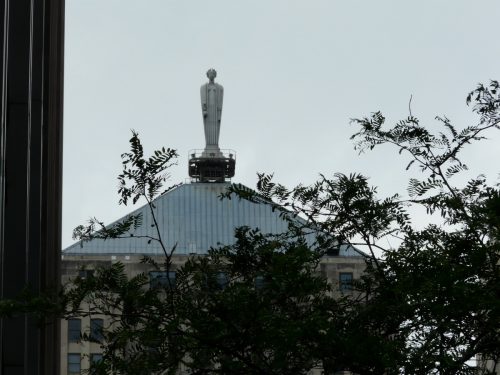 Ceres on high – her statue on top of the Chicago Board of Trade building.

The importance of stories

I realise how much we can learn from stories. Mercury is the planet associated with Gemini, and one thing he is associated with is opinions. We base our opinions on what we hear and read. All the stories I told and heard, and the feedback and input I received from the people I met, especially Americans, will colour my view of the country. And, as I am doing now, I will pass on some of my thoughts based on this.

I was listening to the BBC Arts Hour recently which covered some of Margaret Atwood’s work, in particular The Handmaid’s Tale, much in the public eye of late. Her comments on the relevance of this tale since Trump was elected are interesting. She suggests that fiction (and I would include myths and the daily tales we tell) is maybe our oldest technology, an ancient method of teaching which offers a way of testing something without actually having to do it. Some of the points discussed with guests on the Arts Hour were: 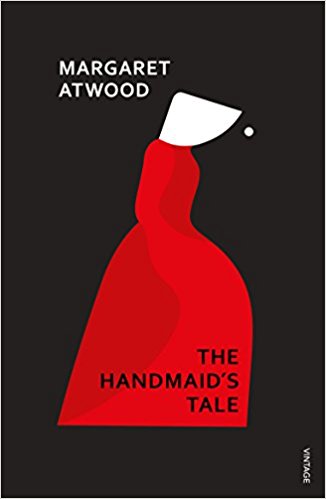 Mercury and story-telling really do affect the future, so looking at Mercury in your chart can be useful, not only in understanding yourself and how you form your worldview, but also to gain tips as to what to speak and write about, and how. We really do have an influence on our future and this is one way we do it. As I have said many times, what we think and express matters!

So, taking this up a level from the personal, I was interested in an interview that Russell Brand did with Yuval Noah Harari. Harari is the author of several books and the two relevant to our theme of the month are Sapiens: A Brief History of Humankind and Homo Deus: A Brief History of Tomorrow, his latest one, although his next one is due out this year. Harari talks of the fact that we need to have common fictions to have a functioning society. What gave humans power, was language – a powerful force in achieving cooperation. And with that cooperation came power over other beings and plants. We gained control and the ability to create and multiply. He calls humans serial killers! With the scientific revolution came the knowledge to hack the laws of nature and so we gained an almost divine ability to design life. 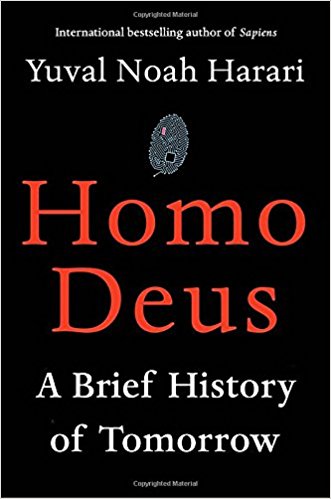 Language and stories unify or divide the world, but they are what makes us a global race. Religion, capitalism and humanism are the world’s main stories, however Harari suggests the only story that everyone believes is the reality of money. There is a consensual notion that a worthless piece of paper can get us what we want. There is a global agreement on the story of money – which is just a story! Stories can be good or bad and our capacity to accept them is vital for the world to operate. One of Harari’s main points is that we need to be able to tell the difference between what is real and what is just a story – the implication being for me that if we know this we can create new stories. Words are spells. The fact that we spell words is not coincidental. In the beginning was the word?

How can we tell the difference between ‘real’ and ‘story’?

Harari suggests that Homo Sapiens can’t. I think he means we need to develop a race of humans that can. In his view, the test is that anything that can’t suffer is a fictional entity. Russell Brand suggested he use anything that can’t love! People, animals, and plants, we now know, can suffer. Companies and countries can’t. Capitalism is based on companies, which lawyers have referred to as legal fictions. Lawyers create legal spells! Nations are constructed. But, Harari maintains, all these big stories we create should serve us – not the other way around. We should not be dying for our country – or our religion. Why should we die for a story? 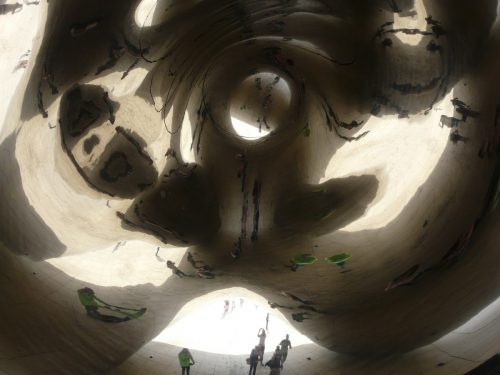 The stories we tell ourselves…

are probably the most important, and it would be wise to question the stories we believe. The stories we tell also create our world. To control ideas is to make the future – that’s why propaganda and fake news are dangerous. Our stories need to focus on what is authentic and true to us, so we can help manifest a world we wish to live in. What are you going to say to the world to contribute to a new future? And what story does Mercury in your horoscope suggest you could tell to create a new narrative for a better world?

“In order to change an existing imagined order, we must first believe in an alternative imagined order.” Yuval Noah Harari, Sapiens: A Brief History of Humankind.

“History isn’t a single narrative, but thousands of alternative narratives. Whenever we choose to tell one, we are also choosing to silence others.” Yuval Noah Harari, Homo Deus: A Brief History of Tomorrow.