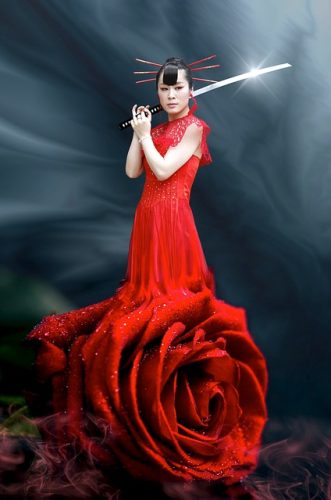 This month I attended the Inner Peace conference in Amsterdam – very fitting timing, as Libra is the sign of peace. It was well attended – mostly by women – however it was good to see men at such an event. My two favourite presenters were Scilla Elworthy, who I have written about often as I find her a very inspiring person, and someone new to me – Lama Tsultrim Allione. She is an author and Buddhist teacher. Both of these women are warm, funny and committed to making the world a better place.

Scilla talked about her latest book  ‘The Business Plan for Peace: Building a World without War’, which I wrote about in my Aries post this year. She maintains that war is past its sell-by date and is passionate in her efforts to achieve peace. She has been nominated for the Nobel Peace prize three times. 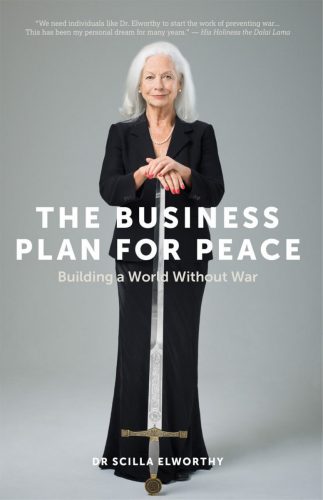 Tsultrim’s talk was based on her book ‘Feeding your Demons’ and we did a powerful exercise which is described in the book. She has worked to bring a feminine narrative to Buddhism, which she found lacking when she lost a child. She felt that the non-attachment principle of Buddhism didn’t help her deal with this loss and she wanted to find principles within her faith that would be of help. 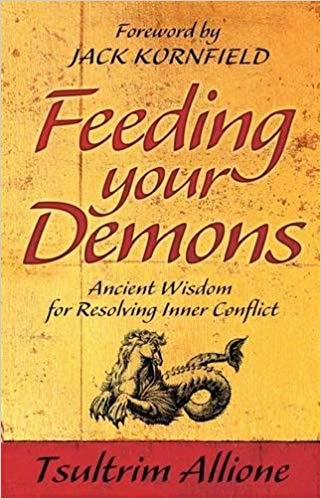 The messages that both these teachers are spreading are that women bring different skills to problems that the world needs to solve. And to be effective in this, women need to do their own inner work. Although there are many brave women involved in wonderful work, we need more women to step up and do what they are passionate about. I agree. Too many women are blocked, by many different issues, from doing what they would love to do, and would be very good at. This is not to say that men don’t share this problem, but Libra is about balance and the world is seriously out of whack when it comes to feminine principles. Too much Mars and not enough Venus! Too many men in decision-making positions, too much war, too much ‘winning’ instead of cooperating and so on. Of course, both men and women share masculine and feminine attributes but this really is about women now.

But how can I change the world?

Many women ask “But how can I have any effect in this crazy, sad world? What can I do?” When I did one of Scilla’s workshops, we were confronted with this question. I know that I am never going to go off to trouble spots and stand up against violence. That’s just not who I am. I am also not made to head up a huge enterprise that could influence lots of people. My skills lie elsewhere. I can educate and work with individuals to encourage them to use their innate skills and I can help clarify your calling. I believe each of us has a vocation and knowing what the universe wants from us can be very confirming and therefore helpful in making us brave enough to do what we love. And this is enough to change the world. This gives me purpose and a knowledge that I am doing my bit. If we all did this what a different place the world would be.

And that brings me to my title. Soon I will be running an evening (for everyone) and a weekend workshop (for women) on ‘Dangerous Women’ with two of my friends. The title comes from our guest, Carol Ferris from Portland, who ran a workshop on this topic in the US. Zelda Hall and I have often run workshops for women and what is interesting about this one is that both of us have noticed what happens when we mention the title. Eyes light up and there is a certain naughty look! Many women like the idea of being dangerous and we wanted to discover why.

So that resulted in a very interesting and ongoing discussion on what being dangerous actually means. Some of the earliest associations are with “arrogance, power of a lord or master, jurisdiction, power, power to harm, mastery, authority, control”. You could say dangerous means you put yourself in someone’s power. Today we talk of peril or risk, something that might hurt us in some way. If we say something is dangerous, it means it could cause problems.

Yes, let’s cause some problems!

Of course as usual, my part will have an astrological basis. On the evening talk I will cover what I am calling elemental dangers. ‘Fire’ danger, such as a woman wielding a sword, is very different from ‘water’ danger, a woman involved in espionage. ‘Earth’ danger, a rich and beautiful woman, is different from ‘air’ danger, a woman with a voice and ideas. So how can we use these to make a difference? What kind of dangerous do you want to be? How can you cause problems and get out from under power to create change and use your wiles to make the world better? And how can we all deal with the backlash? 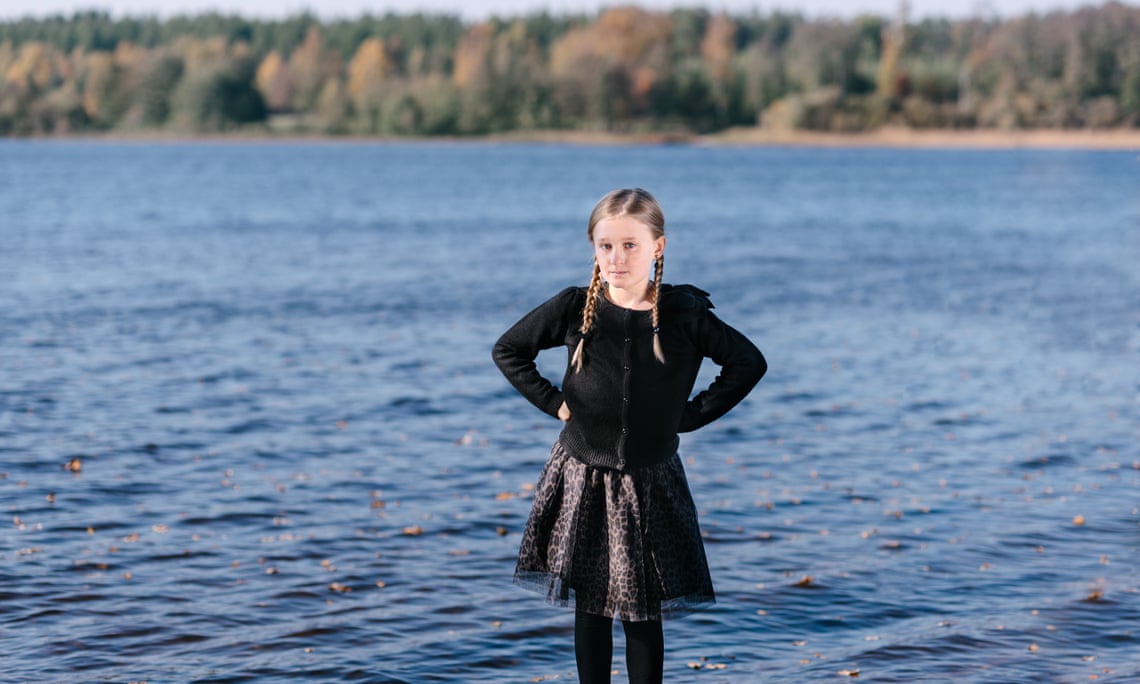 I think this story augurs well – this is Saga Vanecek, who pulled a 1500-year old sword out of a lake in Sweden. When asked about being the Lady of the Lake of King Arthur fame she said, “I’m not a lady – I’m only eight.”

As women, we have dimmed our light for too long so as not to suffer consequences. History show us what happens to brave women such as the suffragettes who suffered terribly when they stood up for emancipation. Many women today are trolled and worse for speaking out. I read an example of how we deal with this in a Guardian article today. It was about Viola Davis, a black Oscar winning actor. The article (link below) is entitled ‘I stifled who I was to be seen as pretty. I lost years.‘  A quote from the article: “For years, she says, this had a damaging effect. “I was trying to fit in, stifling my voice, stifling who I was, in order to be seen as pretty, in order for people to like me. And then going home, not being able to sleep and having anxiety. I have found that the labelling of me, and having to fit into that box, has cost me a great deal. I’ve had a lot of lost years.”

What kind of dangerous do you want to be?

The weekend will go deeper into this topic with inner work and my part will address ‘planetary’ dangers. I will look at how each planet can be used to good effect and discuss how it can be dangerous to yourself as well as others if not used positively.

Stormy Daniels is, for me, an example of Uranian danger. By being truly who she is and not being ashamed of it, she cannot be put down. She is authentic and that has made her dangerous and a powerful symbol for women. Even though she didn’t win her case against Trump, she has caused a lot of collateral damage to an administration that is a problem worldwide. Uranus danger offers an exposure of the truth and can therefore act as a wake-up call.

Each planet has its own inherent danger and that is what I will be covering. I’m looking forward to it even though I might be letting a bunch of dangerous women loose. Or maybe because of that! 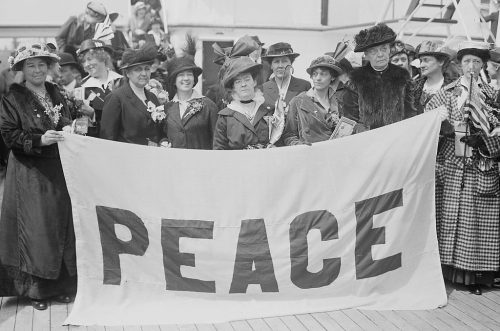 Delegates to the April 1915 Women’s International Congress for Peace and Freedom aboard the MS Noordam from Library of Congress public domain.

This was the basic message for me of the conference and in my work and in this workshop, I want to encourage women to do their inner work so that they can be fearless and brave and step up to the plate. That is what the world desperately needs to be rescued!

The article on Viola Davis.

And a rather long, but interesting video. Also a good book by Lama Tsultrim Allione – Wisdom Rising

Just one from a wonderful site ‘Inspiring quotes from dangerous women‘.

“I’ve just done what I damn well wanted to, and I’ve made enough money to support myself, and ain’t afraid of being alone.” Katharine Hepburn, actress.