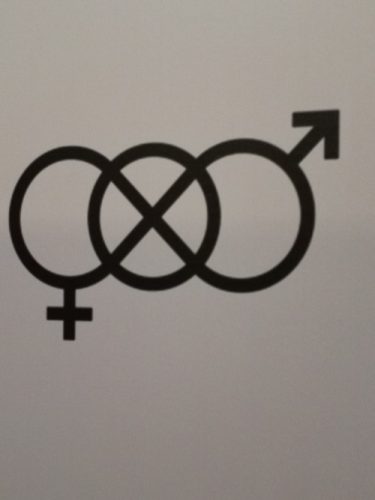 My title comes from an exhibition I visited last weekend. It’s on at the Tropen Museum (museum of world cultures) in Amsterdam until August 2020. The subject of gender fluidity is handled well and offers a lot of food for thought. Especially appropriate at Libra time – that time of balance and fairness. 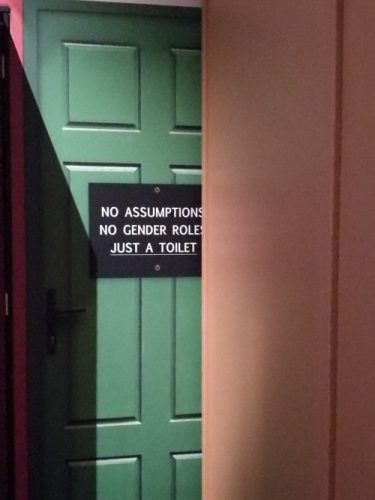 An example of a toilet door in the exhibition.

It made me think about a couple of other things I’d seen this month. One was a Dutch article which examined which books writers had been reading lately. The question asked was ‘who have you been reading lately – male or female writers’.  This too was food for thought as I had never really considered that. Usually, I choose astrology books on subject, but sometimes I want to investigate new writers with good reviews. And other books I read are ones usually recommended by others, unless they are ‘scientific type’ studies that I come across in my research, and I want to know more about a particular subject.

A quick scan of my latest reads showed that there were more women authors than men, and, rather alarmingly, but this is in no way a scientific study, the more ‘academic-sciency’ type books are mostly by men and the novels and ‘self-development’ books are mostly by women. Amongst my astrology books both men and women are well-represented.

Academia has historically been male-dominated. There are still calls for more women to be heard at conferences and there is still a dominant rational left-brain ‘masculine’ approach, which some would call scientism if it goes too far. Of course there are exceptions and this is changing slowly.

The conclusion from the books’ studies were that women read books by men and women (50-50), and men read more books by men (80-20)! Of course what we read and hear has an influence. And naturally who we see in print also matters, as it affects our aspirations. But are we still in the stereotypical world of duality, men-left-brain science and women-right-brain soft stuff? I seem to be unconsciously going along with that in my reading.

Men and women of astrology

As I said, both sexes are fairly well represented on my astrology book shelves. However in the past, and I mean not too many years ago, women (and the odd man) bemoaned the fact that although an overwhelming proportion of attendees at astrology conferences were women, (still true) there were many more men presenting. Thankfully that has changed with efforts from the community for more equality, and also due to changes in the world. Women are much more prepared to step up to the plate and deliver these days and in astrology circles this has been encouraged. I watched a good interview on this too this month entitled ‘Why are more women into astrology than men’ (video below) where astrologer Chris Brennan interviewed Lisa Ardere.

The interview covers far more than just who is ‘into’ astrology, however a look at my client list over the past few years shows about 30% of my clients are men. I thought it might have been more. As far as I know I have had no clients who want to use the gender fluid pronoun ‘they’ but the gay, bi and trans groups are represented. I live in Amsterdam after all! My experience is that people are people, and deep down have the same fears, worries, insecurities and things they are proud of. Gay couples have the same struggles with kids and relationships as straight ones do. Everyone wants to know about family, careers and especially relationships, but due to cultural norms and values, the questions are asked in different ways. And I think for the same reason more women feel comfortable seeking help.

What has astrology got to say on the subject?

I have been shocked at the number of astrologers who try to see ‘gayness’ in charts. If you don’t even know by looking at a chart whether it is for a male or a female (or even a company or an animal), to quote a fiery young lady in the news: “How dare they” make predictions on whether a child will be gay? Or try to do studies showing ‘homosexual signatures’ in horoscopes. I am really pleased to see the astrological community welcoming all forms of sexuality and gender into our ranks. This gender fluidity will definitely help to get rid of the judgement that can be present in the proclamations of a small minority of astrologers. My conclusion after years of client work, is that astrology, in the form of a horoscope, has absolutely nothing to say on the subject.

And then there is the ‘it’s all in the genes’ club. There have been efforts to see sexuality in physical genes too, but epigenetic studies are raising questions about this. The nature and nurture debate is still alive and well. But the bigger question is: why do we need to divide people into groups at all? Why is it so important for us to know whether we are looking at a man or a woman? Or who the person we are dealing with is having sex with? The second question for me is a no-brainer – it’s none of my business! However I have caught myself asking, when looking at someone ‘is that a man or a woman?’ Why am I so curious and why do I need to know this?  It is an automatic reaction that I chastise myself for, as it shouldn’t matter, but it happens before I know it. We are so programmed on the binary – probably originally for the continuation of the human race – that it is difficult to bypass this reaction. 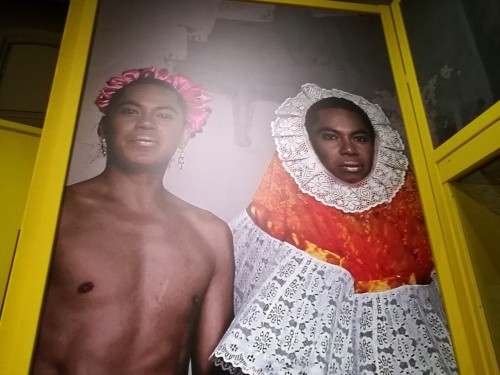 Another one of my (not very good) photos of the exhibition.

The exhibition also covered intersex people. Those born with attributes of both genders or chromosomal abnormalities. According to one source (link below) intersex births are about as common as people with red hair! – 1.7 % of all births, although this is difficult to ascertain, as some things are not noticed until puberty. I am glad this subject is coming out, as it has been an embarrassment for many families throughout time. Now, at least the subject of not choosing operations at birth is openly discussed.

For perhaps too long the world has been binary. Venus-Mars, female-male, cooperate-win. Politics in many countries is based on winning – govern or oppose. In science it is material proof or pseudo-science. In medicine, a disease is ‘beaten’ with drugs as opposed to using the wisdom of nature and the body. And there are many more examples of polarisation based on ‘masculine’ and feminine’ approaches. I think the upsets today in all these areas are a symbol of needing a third way or better a sliding scale of approaches, and gender fluidity is one area leading the way. It is opening our eyes to the fact that more is possible than simple binary choices. As I have said often – politics needs to change to a more collaborative system but countries are going kicking and screaming into this new era. It seems obvious that compromise must happen!

Back to astrology and timing

Astrology has often been ahead of the game by being a home for non-conformists, the LGBTQ+ community being no exception. We weird people are happy to hang out with other weird people! Much could be learned from astrology by studying the natural cycles of planets and the vast historical lineage of observation too. Astrology combines both science and art. it is left- and right-brained. The science is the astronomy. For astrologers, the position of the planets today, speaks volumes about the potential of current times. I will name three astronomical factors that I think symbolically represent the fact that the time is ripe for combining the masculine and feminine in all areas of our world.

I wrote about this last year when Uranus entered the sign of Taurus. My post Lightning strikes the bull covers various themes, and one of these was the body. I didn’t cover gender fluidity but it fits the symbolism. Uranus is a wake up call, a change in our thinking, a revolution. It heralds change and a new order. Taurus represents the material and the body. We need to become aware that, as an astrological model would say, no-one is ever purely female or purely male. Planets have masculine and feminine associations and we all have all of them in our horoscope, which would mean there is a sliding scale of male-female qualities in everyone. Society dictates which ones should be favoured. We are now being asked to question this.

Although I respect anyone’s decision to go through transgender surgery, I find it quite violent for the body and my belief is that we shouldn’t fight nature. It makes me wonder if the changes happening now will make this major surgery less necessary if we could accept all types of bodies, genders and sexual preferences. I hope so, as I have seen a lot of pain – physical and otherwise – when this path has been taken. 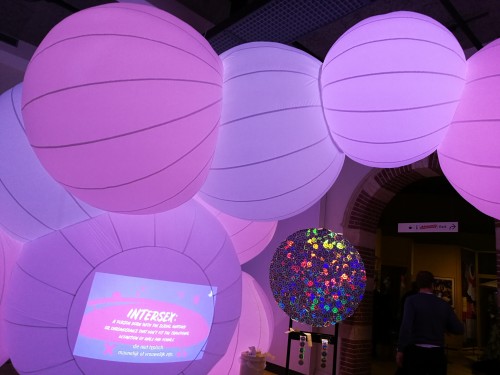 Another of my photos from the exhibition.

Yes my old favourite! Which you will know I go on about if you read my blog. The symbolism of this equal dwarf-planet status of these two celestial bodies also fits with my theme this month. Pluto in the mythology with Ceres is a dominant male figure. Ceres, as the mother and older woman, eventually brings her power to the table to oppose Pluto and a deal is reached. Male and female negotiate. Balance is maintained.

Last and certainly not least is the ending and beginning of a long astronomical cycle, when Saturn and Pluto come together in the heavens. Just as many astrologers have done, I have written about this meeting. It is active now even though the actual conjunction is next year. And the themes are present everywhere. Saturn represents the material, the proven, the academic, government, hierarchies and authority. Pluto represents deep transformation, the nuclear bomb under all these areas. A look at the news is enough to see that power (Pluto) which is not responsible (Saturn) will be passionately opposed in these areas.

Pluto also represents sexual energy. I think Saturn in the mix means we need to accept the reality of different sexual appetites and preferences. Saturn in his material role – in this case the physical body – is due for a radical rethink (Pluto) when it comes to intersex and gender fluidity. 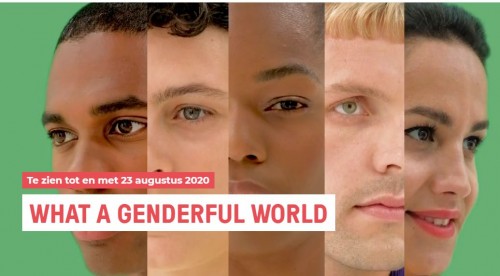 The wonderful exhibition publicity on the Tropen Museum site

The potential to embrace these changes is within our grasp. But will we? Or will we stay black and white – polarised in our views? I think the latter will not create a positive future, whereas many shades offer more creativity and have a better chance of providing colourful years ahead.

An article on the myths surrounding intersex.

The rather long but interesting interview mentioned above.

For those interested in the exhibition – a video only in Dutch…