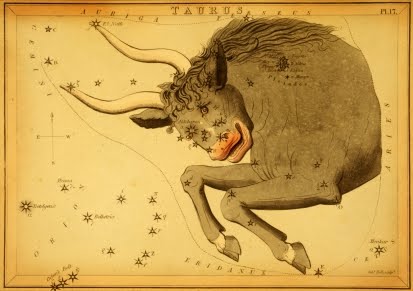 It has been an interesting time for me since my last post, having had contact with completely different groups. I gave a lecture for a group interested in art, I attended a breakfast in connection with the Trend Watcher of the Year, I went to a lecture given by Gregg Braden and I gave a workshop for the ladies of the Industriele Groote Club. All completely different audiences and energies. However, many people in all the groups are asking about the future and everyone has noticed that there are weird things happening here on earth.

Since we are in Taurus time, I want to turn my attention to the earth and, as I am often asked about 2012, I will comment on that too.

The Bull – ruler of the earth

Many astrologers associate the sign of the Bull, which is of course an earth sign, with our actual planet. In astrology we say, for example, that Mars rules the sign of Aries and Saturn rules the sign of Capricorn. But we don’t often talk about rulership for our own planet. I do think that Taurus is the most ‘ earthy’ of signs though, so this is a good time to contemplate our home in the universe.

So many things are happening; the ash cloud, the BP oil problems in Louisiana, the floods and the earthquakes. Astrologers (including myself), have associated this with what is happening with Saturn, Pluto and Uranus in the sky, and indeed these planets are highlighting interesting times.

However not many astrologers yet work with Ceres, a dwarf planet since 2006 and one I think we should take seriously. She is, in mythology, the Goddess of grain. A Goddess who was furious with Pluto for taking her daughter into the underworld, and who showed her anger towards the male Gods by not allowing anything to grow. She is associated with the seasons and in my view with the environment.

What is capturing my attention at the moment is that in the last weeks she has been within spitting distance of Pluto in the sky. And spitting she is! The two will actually cross swords later in the year, so I think this is just a warm up to her real rage!

So let’s use the myth to attempt to find some meaning in all these disasters. 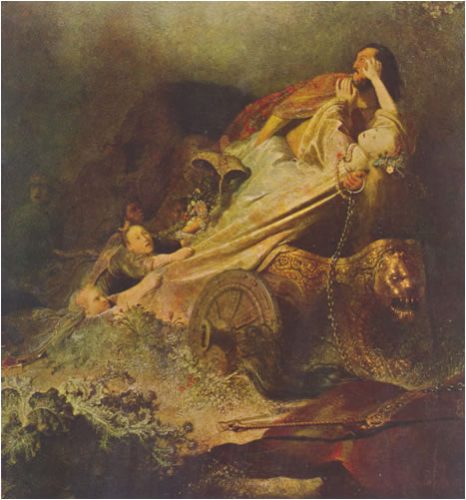 The Rape of Persephone – Rembrandt 1631

Interesting to note as an aside that dis-aster comes from aster meaning star. So it means out of tune with the stars. But where were we? Pluto is about power, big money, oil, abuse, rape and, on a good day, transformation. Ceres, when her daughter was taken, at first thought she was powerless in the face of the kidnap and rape by Pluto (Hades). Eventually though, after expressing her fury and her many attempts to get the Gods to listen, a compromise was reached. After she stopped everything growing and the people were starving (sound familiar?), the Gods relented and her daughter Persephone was allowed above the ground for part of the year. It was then that the earth flourished (Summer). In the Winter when Persephone was with her now husband below the ground, it was barren. Pluto could not get away with everything he wanted. There is a lot more to this myth but this is the part I feel is relevant to the earth.

Perhaps Ceres, as guardian of the earth, has again had enough of Pluto’s power and is lining up to confront him again. She is sick of the abuse of the earth, the power that huge companies have. The way that the airline industry is upsetting the environment. Perhaps she is saying ” If you carry on, I will produce events that you are powerless to do anything about – enough is enough!” In the myth she can produce weather (floods and winds?) which the male Gods are powerless to affect.

Every attempt to stem the oil flow until this week (minimal solution), has resulted in more oil and, if we are to believe what we hear, even more lies about how much oil is escaping. Apparently BP are continuing to go ahead with deep drilling and there is much buck-passing about responsibilities. What needs to happen for attitudes and activities to change? Perhaps a disaster on this scale? I think if we don’t listen Ceres will carry it on even further later this year.(She actually meets Pluto in the sky on 19th October this year). Watch this space.

How do we fit into the scheme of things?

Ceres is part of our Solar system, so what I am commenting on here is quite tiny in the scheme of the wider universe. Western astrologers mainly use just the planets out as far as Pluto, now also a dwarf planet – the same status that Ceres has. But our solar system is just a tiny spot at the edge of the Milky Way galaxy. The fixed stars we can see, are for the most part in the Milky Way and these form the backdrop for the planets. They wander (planet means wanderer) across these stars in a path which we know as the zodiac belt. Eastern astrologers use a different starting point for their zodiac which takes these fixed constellations into account. In my view their astrology includes more of the cosmos and is possibly more fatalistic as a result. After all the stars unlike the planets are fixed and cannot be changed. Maybe the planets offer more opportunity for negotiation. Western astrology is more solar based and therefore more focused on what we humans want, in place of what the cosmos might have in store for us. 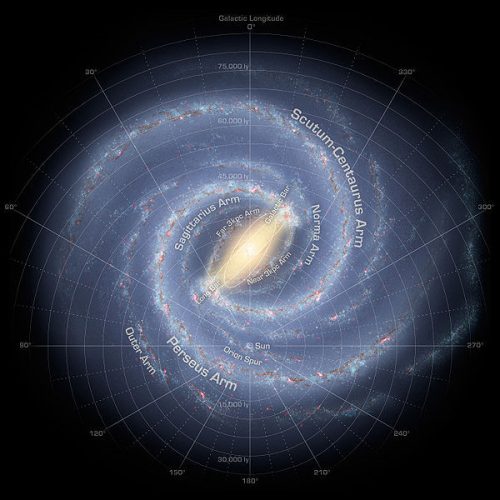 Nasa depiction of the Milky Way

In case you have never heard mention of the 21st of December 2012, it is often referred to as the end of something which varies from the end of a very long cycle, to the apocalypse and the end of the world. The earth shifting wildly on its access or a jump in consciousness. 2012 is not something that we western astrologers can comment too much on (not that that stops us), as it is a line-up of something we don’t normally look at – an alignment in the galaxy as a whole. This has to do with the galactic centre (which is in Sagittarius seen from the earth), and the plane of the earth’s equator. This happens only once in a very long cycle of around 26000 years. So yes, it is undoubtedly a very important time. But is a longer process, not just the one day of 21 December 2012. And we are already in it.

The Mayans knew of this cycle, which was broken up into five ages of 5125 years each. It is now known that at the end of each of these five ages something momentous happened on earth. Where we are now is not only at the end of one of these smaller cycles but also at the end of the whole cycle, so therefore even more important. Other theories also point to this being the end of a cycle. Novelty Theory, for example, calls this a singularity. 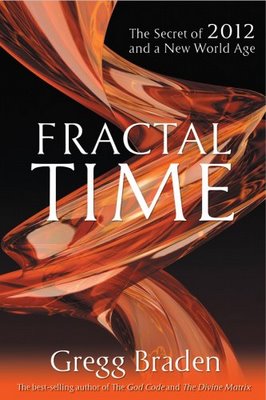 Gregg Braden has a new book out on 2012 and below is a link to a good video about his ideas. He suggests that the other smaller cycles have ended in an ice age, a flood, winds and fire. He asserts that the Mayans were not predicting the end of the world but the end of a very large cycle. For him it is about a consciousness shift, with which I agree but perhaps this one is also about ‘earth’ type disasters to help us make the consciousness jump needed. After all we are not wont to change things in a fundamental way unless we really have to.

I do think though that the more conscious we become about the effects of our treatment of the wonderful resources of the earth and how we treat each other, the less pain we (and the animals, like the poor birds and fish in the oil) may have to suffer. Please let us placate Ceres before she gets really outraged.

The video mentioned above on Fractal Time from Gregg Braden. On YouTube there is a lot of other interesting material from him and others if you are interested in this topic.

“A business is successful to the extent that it provides a product or service that contributes to happiness in all of its forms.”
Mihaly Csikszentmihalyi, Business Author and Professor of Psychology

“Does wisdom perhaps appear on the earth as a raven which is inspired by the smell of carrion”.
Friedrich Nietzsche

He was talking of old age here but perhaps he could have meant something else too.