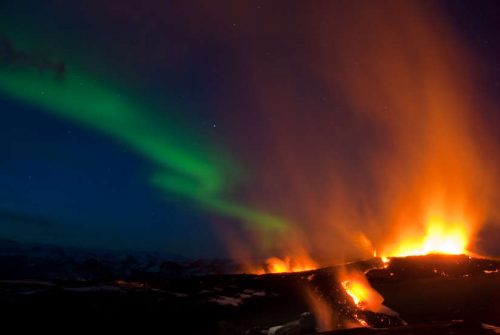 Photographer Albert Jakobsson’s wonderful photo of the Iceland eruption and the Aurora Borealis.

My – the earth is getting cross. Earthquakes a plenty, plane crashes due to weather and now volcano’s making Europe very quiet. I think Ceres might be involved in taking on Pluto. When he has a tantrum and erupts and makes the earth move, she sends winds to get a message across. But to whom? And what for? She seems to want flights to be grounded at least. I think when Mars crossed her path this week (quincunx) she got up the courage to take on Pluto, as she does in the mythology. She’s heading for him as I write but she will chicken out on the full frontal until October – the 20th to be exact – although she gets close enough to spit at him. It will be interesting to see what she has in store for the showdown.

In the myth, there is a compromise between them, however she does have to alter the weather to bring all those power-hungry male Gods into line. So was there too much male power in Poland? And why is she annoyed about air travel? Does she want us to hear bird song and remember? And why from Iceland? It seems to have been in the news quite a lot recently trying to exert a bit of power. There’s a message in there somewhere for us older women!

Perhaps we can’t do anything about male outbursts of power, but we can bring things to a halt by creating interesting environments!