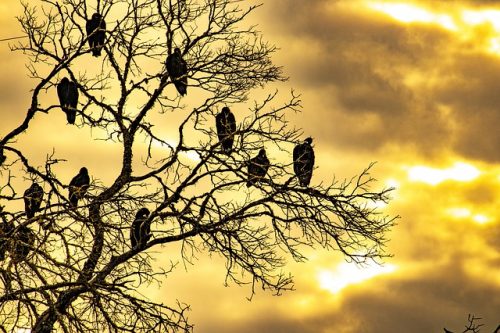 When Emmanuel Macron was running for president with his En Marche (EM!) party, he is quoted as saying “France needs a ‘Jupiterian’ head of state.” Clearly he is referring to himself and, as he is a man versed in the use of symbolism, one wonders how much he knows about astrology! Our sign of the month, Sagittarius, is aligned with Jupiter, and Macron was born at a time when the Sun was in this sign. He just snuck in before the solstice, which occurred that year (1977) in Paris on the 22nd December –  the day after he was born, which means if he had waited a bit longer he would have been born a Capricorn! In my view, just this fact makes him strongly Jupiterian, but he also has Mercury, Venus, Neptune and Ceres in the same sign. So I’m not surprised the name Jupiter stuck – it really is perfect for him.

From a Newstatesman article entitled ‘The French President’s unhealthy obsession with symbolism.

I can imagine that head god Jupiter (Zeus) would have felt at home in Paris. The elegance of the palaces, the food, the wine, the gold and the glorious past are all very fiery. Even though the sign of Leo appreciates all of that more than Jupiter would, he’s not averse to luxury and being elite. After all, Jupiter rules politicians, law-givers, lawyers and professors. The people that we plebs (see more of my comments in another post on this) sometimes love to hate!

And yes, Macron has definitely been accused of being part of the arrogant elite! The original boy wonder’s crown appears to be slipping, however, as he faces weeks of the most violent protests for many a year. My heart goes out to the French, particularly in Paris, as I’m sure they would rather be enjoying the warmth of Christmas celebrations in their beautiful city. 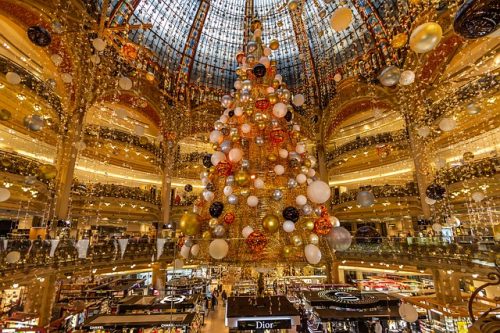 I’ll take a look at two charts. One for Macron, for whom there is a birth time. I wrote about him when he was elected in 2017. The other is one of the many charts for France. Although many French astrologers, who obviously know much more than I do about France, seem to favour the 1792 1st Republic chart, I always like to look at charts that apply to current circumstances. The one I have chosen is for the 5th Republic and there are several charts for this too. The State Seal was affixed to the Constitution on 6th October 1958. The time this happened is uncertain – Nicholas Campion’s ‘The Book of World Horoscopes’ states approximately 6:30 pm. As this is a ceremonial moment affirming this constitution, I like this chart, but there are good arguments for using other dates and times for the start of the current administration too.

And so to ‘Jupiter’

Below is Macron’s chart and outside it are the positions of the planets on December 1st 2018, one of the most violent days of the ‘Gilets Jaunes‘ riots. The protests were ostensibly about taxes being raised on fuel, but the anger being expressed is about a lot more than that of course. We can use these charts to look at what is happening for Macron himself, and what stands out for me is what is highlighted in green. 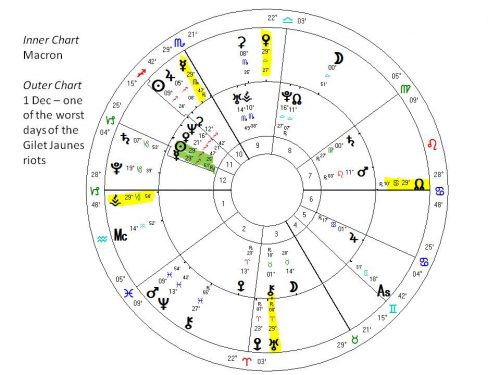 This is his Sun and Mercury together in Sagittarius – part of his ‘Jupiter complex and it describes his ability to express his philosophy on many things as well as his interest in politics. He is a good presenter and a brilliant communicator. This combination suggests he is good at the ‘big picture’ or ‘macro’ level. He is attempting to find a solution for all of France and is acting as a ruler. But this combination can also result in arrogance – a kind of playing god – thinking his ideas should be obeyed! Zeus/Jupiter will not tolerate any insurrection and he uses his authority and his thunderbolts to destroy anyone who challenges him. Interesting then, that this week, if the news is to be believed, Macron was reported to be considering using chemical weapons as a last resort against the rioters! Modern day thunderbolts.

The yellow planets highlighted in the charts above are all triggering this pattern in Macron, as they are all at the same degree (29). Venus and Mercury move quickly, so they have less weight. Vesta, who is sitting on Macro’s ascendant (how he is seen – Capricorn – ambitious and business-like?), is also just passing through. However as she is a goddess who watches over fire (see my last Scorpio post) we can see that Macron is feeling the heat of a goddess at his front door who stands for the protection of hearth and home, as well as the central heart of any city. Many of the protesters are using fire to destroy property and I imagine Vesta is alarmed that the flames are out of control. The North node is also picking up this pattern. I don’t work much with the nodes but this would suggest perhaps that some karmic chickens are coming home to roost for Macron.

However, the most interesting celestial happening for me is Uranus triggering Macron’s Sun and Mercury. In mythology, Zeus punished Prometheus (a good match for astrological Uranus) heavily for giving fire to mankind and it seems that Macron – in the form of Zeus’s protégé – is reaping the rewards of that. Prometheus/Uranus is getting his own back. Jupiter is getting too big for his boots! Now mankind can use fire against the ruling classes. The fire in this case represents consciousness and knowledge. Prometheus awakened the masses to what the ‘gods’ were up to. The protesters are awake and will not stand for dishonesty or inequality. And Macron’s policies are not helping the average citizens who are not interested in his long-term big picture. They need action to help them now.

In the thick of it

The process in which Macron finds himself has been active for most of 2018 and will continue into 2019. The dates when this energy was very high were 5 May 2018, 22 Nov. 2018 and the last exact hit will be on 19 Feb. 2019. After that it will dissipate. This is a real wake-up call for Macron. A shock. A need for him to change. And because Mercury is involved he needs to listen. Truth, honesty and changes of mind are required. Macron needs to come down from his symbolic high horse. Perhaps he has been too arrogant.

A good Jupiter is a wise judge and a talented strategist. He needs to cultivate these qualities sooner rather than later! The signs of rumblings were there in May when the Gilets Jaunes movement started with the posting of a petition online, and November was when the mass demonstrations began. As the matter is far from resolved, it would seem that Macron’s wake-up call, in the form of disruption, needs to continue until at least mid February. Although he has set up discussions with this leaderless and non-political movement, he hasn’t fully got the message yet, and throwing more thunderbolts is not the answer. To quote Stephen Fry in his book Mythos, a modern telling of the Greek myths:

After Zeus has won battles and created an empire  “… everything alive worships and adores him. This should be the happiest day of his life. Something is missing. Something … he frowns and thinks. Suddenly a great lightning bolt stabs down from the sky and strikes the ground, sending up a violent puff of smoke and burnt dust. ‘Don’t do that, dear,’ says Hera.”  Maybe our modern day Hera, Brigitte, can rein in her husband Emmanuel! 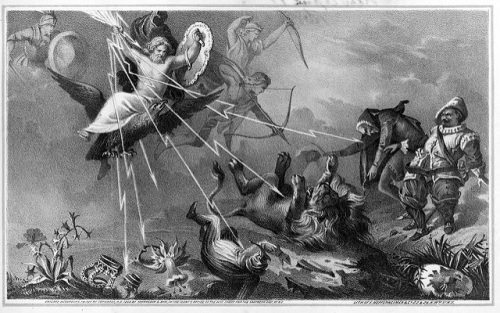 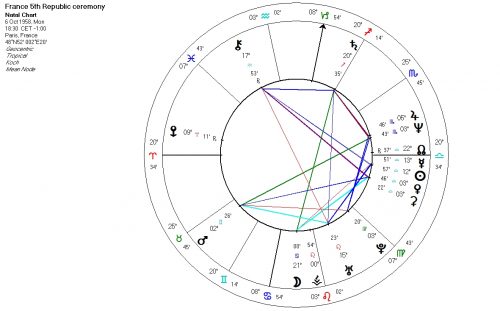 My choice of 5th Republic chart – the approximate time of the ceremonial fixing of the State Seal to the constitution.

There are always many celestial events that trigger charts. I have chosen a few I find relevant to the current situation that caught my eye in my choice of 5th Republic chart. This is a chart for an administration and the Sun (leadership) in this chart is in Libra, along with Mercury, Venus and Ceres, suggesting that fairness, balance, and proper democracy is at the heart of government. But there is a dilemma here for leaders, as Jupiter, here in Scorpio, reflects the culture, beliefs and strategy of the 5th Republic. It suggests that keeping control is part of the government culture. But it can also mean there are hidden agendas, and Jupiter being next to Neptune might suggest delusions of power.

Interestingly, during the riots, Ceres, the goddess I associate with democracy and taking on political power and greed, has been visiting this part of the chart. She is taking on government strategy! And she is not alone. Vesta is active here too, as indeed she is in Macron’s chart. Not only is she working with Uranus in the sky, but Uranus has been waking her up in the 5th Republic chart too. As I suggested in my last post when discussing Vesta: “We need to restore connections, create warmth at the centres of homes and cities …” Our homes need to be a place of refuge and comfort, especially during the dark days here in the north. One of the problems faced by rural communities in France is the lack of services in villages, meaning that travel to larger towns is often essential. That’s why a fuel tax increase was the last straw. Villages and towns need a central warm ‘heart’. 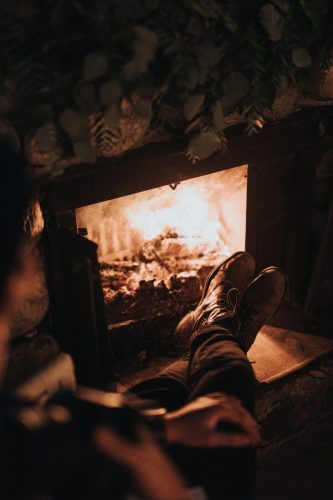 The position of Neptune in the sky suggests confusion reigns at the top of this government, and Saturn is trying to ensure that leaders take responsibility for France’s mission, causing them difficulty. However, to me, the major theme in this chart is given by Pluto. Although the position of the Moon in this 5th Republic chart might not be exact due to approximate timing, Pluto has been triggering Luna this year. The Moon represents the people in a government chart. Interestingly, the Moon is in a very similar position to the Moon in the UK chart, both in Cancer and quite close together. Brexit, which I have commented on often, is very indicative of this transit. The people want power, and if they are feeling powerless, the result can be rage, violence and destruction. It also describes the fundamentalist positions being adopted. 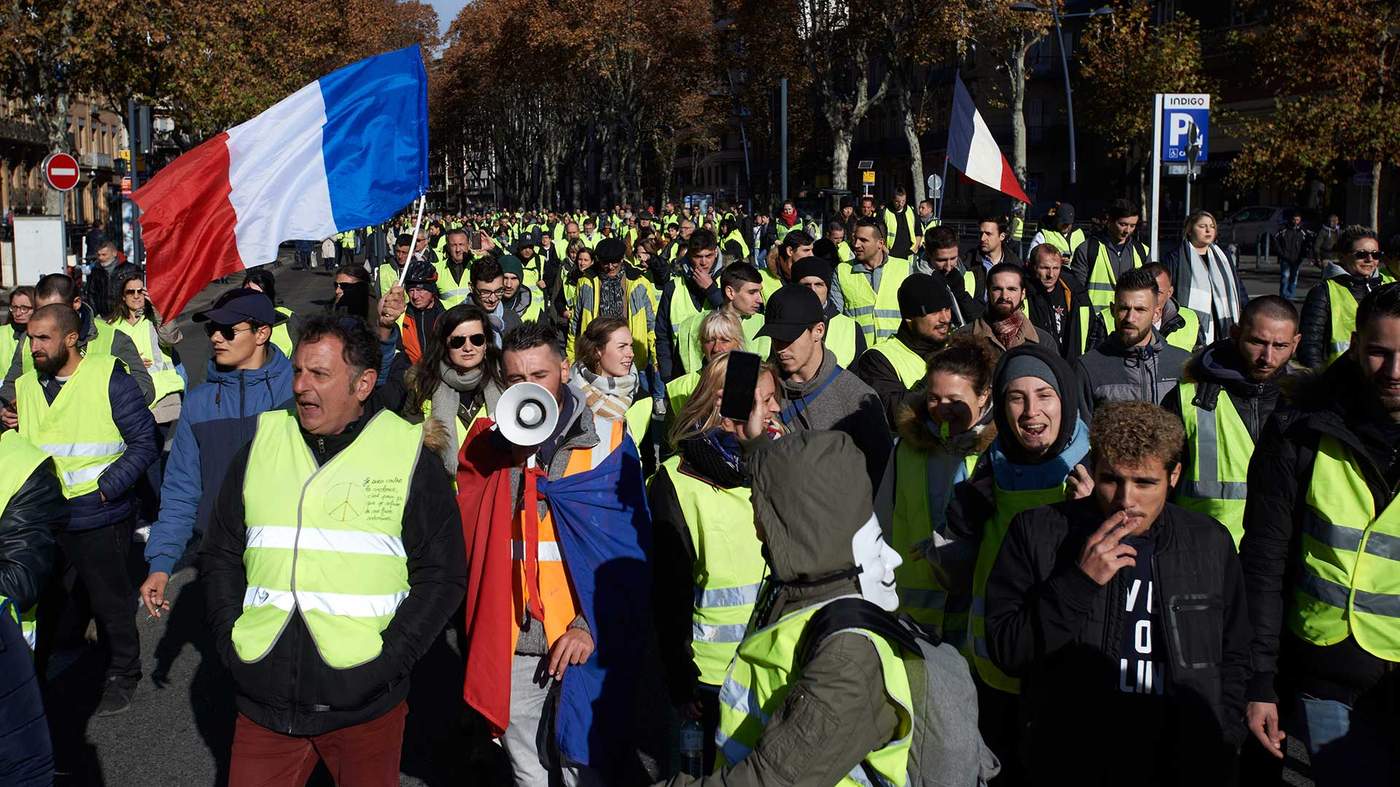 The position of Pluto in the sky, for both France and the UK, suggests the people are not about to put up with the abuse of power. Citizens want, and will have, influence. The Moon in Cancer in both charts means the people want to be protected and nurtured by having good food and homes and by being part of the system. The sooner both governments realise this the better. The UK started this transit slightly earlier than France so this is definitely a warning for Macron. It is abundantly clear how much trouble the UK government is in. In the face of mass rebellion from grass roots levels, governments are powerless, given the structures that are now in place. The difference between the ‘haves and the have-nots’ will no longer be tolerated. Pluto wants nothing less than fundamental change in both countries. We live in interesting times!

From fellow astrologers who know something about France:

Lynn Bell on the astrology

And from the news:

An interesting article on Emmanuel Macron the man.

The article referred to on an image above The French presidents unhealthy obsession with symbolism.

And wonderful pictures of the real Jupiter.

A BBC podcast – France’s Yellow Vests: Macron’s Malaise – 49 mins long however worth a listen if you are interested in some of the background.

“The world needs what French men and women have always taught it: the audacity of freedom, the demand for equality and the desire for fraternity.” Emmanuel Macron in his inaugural speech.

But maybe he doesn’t need it quite so much at the moment!