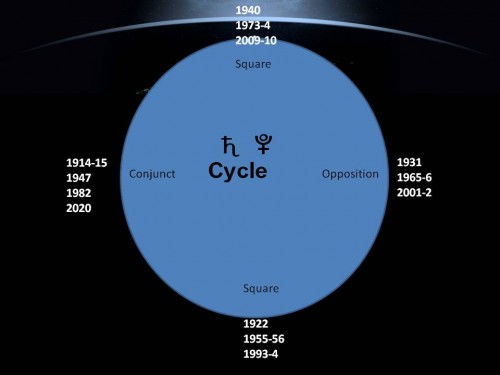 Way back in 2001, I wrote an article about a planetary cycle that is very relevant now. It involves Pluto – the planet that in modern astrology rules our sign of the month – Scorpio. The other planet involved is Saturn. At the time, in 2001, the cycle was at its halfway point. Now the reason that this cycle is currently very important, is that in January 2020 these two planets will meet again, signalling the end and the beginning of a cycle that has coincided with major world events, including wars and important times for the economy.

I wrote about this cycle a second time in my Scorpio 2009 post, when the cycle was at the 3/4 stage – also an important point. The link for the 2001 article (mainly for astrologers) can be found in this 2009 post.

Can you feel it?

Saturn and Pluto have been dancing back and forth and heading towards each other for quite some time now. Opinions differ among astrologers as to exactly how near they have to be to each other before we experience events that coincide with their archetypal symbolism. However for me, in the last year, their themes are more than evident. The actual date they meet is January 12th 2020, a peak date for the start of this cycle that corresponds with 1947 and 1982, and of course many years prior to that. 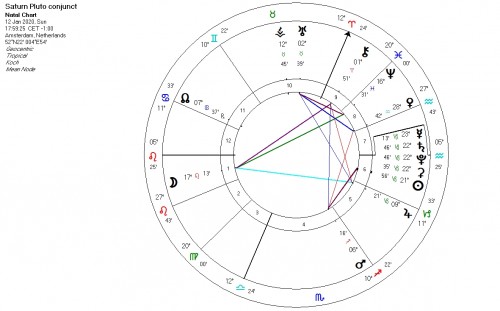 The exact time in Amsterdam when Saturn and Pluto meet to start a new cycle involving these 2 planets.

So what are the themes this time around?

What is ending now? In 1947 we were emerging from the end of WWII, 1982 was the end of a recession. But did we plant well at the beginning of the new cycle in 1982? The start of a new cycle is always a time to plant seeds for the coming years. Looking at news and social media, it seems we have learned nothing of Saturn’s wisdom since 1982. And Pluto’s power is being used for violence, murder, and cruelty. To lie and manipulate to keep control. A negative getting together of these two planets is pretty dire. Abuse of authority and power can be seen on a global scale and in private.

The EU is ending in its current form with the UK still attempting to leave – maybe next year will be the end! Hong Kong wants to leave China, Scotland wants to leave the UK and Catalonia wants to leave Spain. Of course there have always been secessionist movements but the end of this cycle, I think, highlights a nationalistic tendency globally, brought about by lack of trust (Pluto) across country borders (Saturn). Countries want to take back control (Pluto) over their laws (Saturn). This creates violence and division, as in today’s world physical borders no longer mean much. Trump’s wall (Saturn) won’t stop desperate people with a need for survival (Pluto). Laws (Saturn) won’t stop people risking their lives and dying (Pluto) in search of a better place to lay down some roots and work to support families. And climate change doesn’t pay heed to any border. 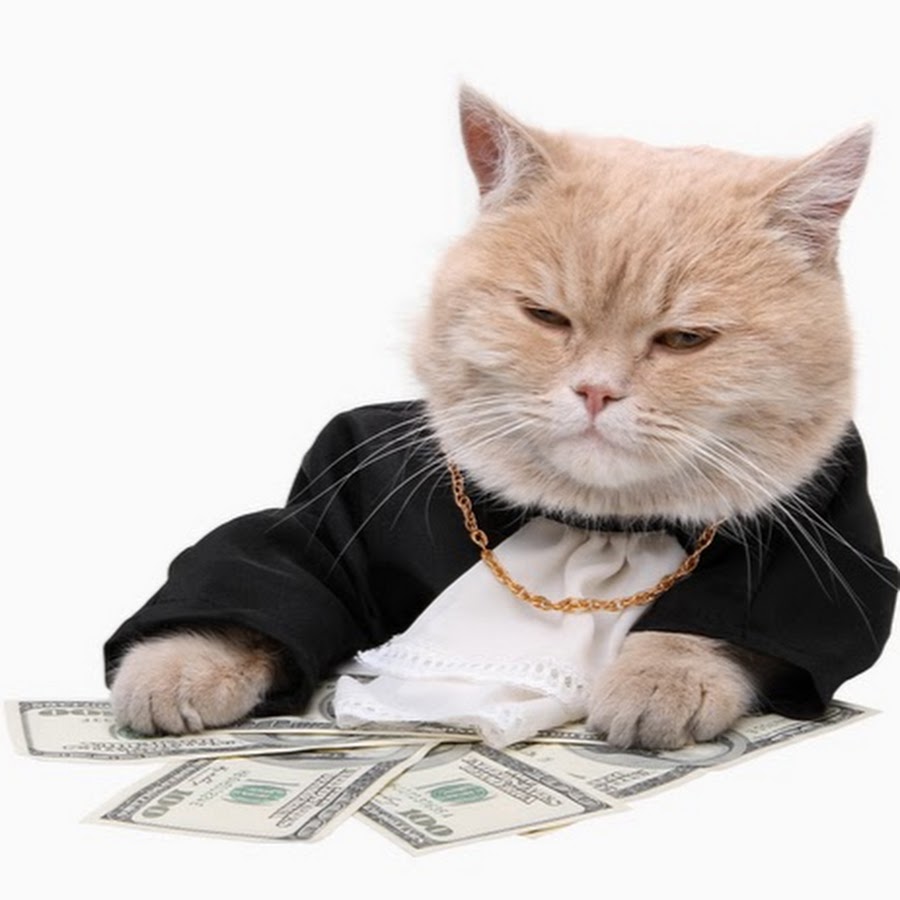 There have long been murmurs that financial systems need a total overhaul. This would be the time! Death and destruction of wildlife and forests are heart-breaking – the latest images coming from Australia. The world is totally interconnected – this is a time for working together on worldwide issues, not pulling out of global pacts and going it alone. Making binding, powerful agreements and learning to trust, is what is required. Taking responsibility for systems which need to die, and building new ones. Much of this devastation is caused by money – either by greed seeking huge profits or by trying to buy bread for your family. Two sides of the Pluto coin – plutocracy or survival.

Messing with our heads

Saturn represents people in authority or with status. Watching the election campaign in the UK makes it hard to know what is true. There are sex scandals involving Boris (but when haven’t there been?), blatant lying, sneaky marketing and grandiose promises. The Tories have been sent to the naughty corner on several occasions, one of the latest misdemeanours was using a fact check logo on Twitter to damage the Labour Party.

The banned old Duke of York

This was a heading in a newspaper about the spectacular fall from grace of Prince Andrew, who is tied up in the Jeffrey Epstein case. And need I mention Trump when talking of lies and sex? I try to watch or listen to full interviews or go back to source (i.e. the people themselves talking) to see what I think and feel. Reading an article means you always get a particular slant and it was clear to me that when I heard snippets of the Prince Andrew interview with Emily Maitlis, I got a very different impression from when I listened to the full interview.

This was also true of an interview I saw with Jennifer Arcuri – the woman linked to Boris Johnson in the case of  his not declaring ‘interests’. I try to give people the benefit of the doubt – after all they are damaged humans as we all are. These days I really often can’t decide what is true. Deep fake videos and doctored images abound. And in our super speedy world we can be easily manipulated by a heading or an image. Although I must admit to loving some of these doctored images. These are some with the new Speaker of the House in the UK, Sir Lindsay Hoyle. 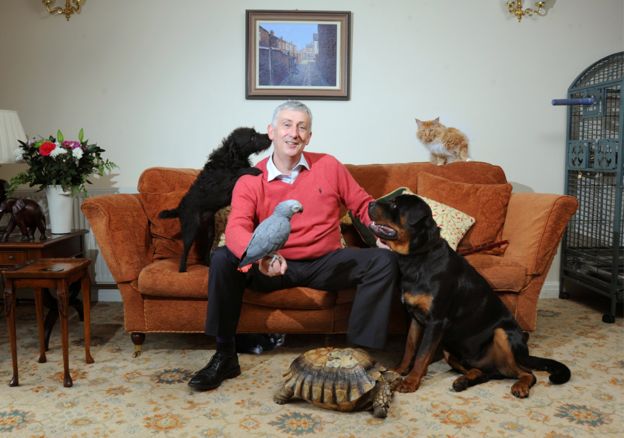 Original image showing his animals all named after politicians  – just because I like it. 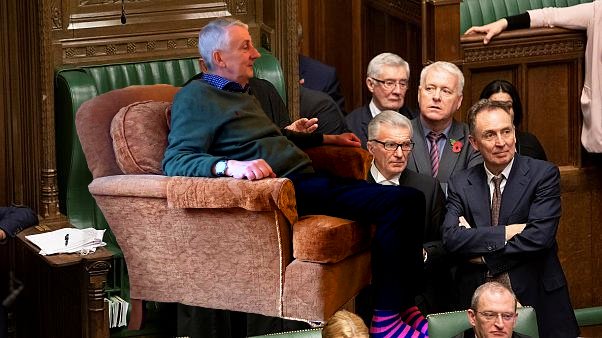 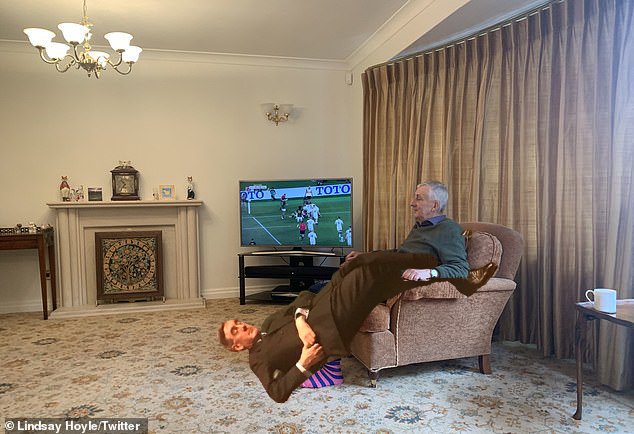 Not just any old Pluto-Saturn cycle.

Of course the start of every cycle is different, both astrologically and because time has moved on. What is glaringly obvious to me – yes you guessed it – is that Ceres is again in the mix. She gets everywhere but this time she really is in spectacular company. At the exact start of the cycle she stands between the Sun and the Saturn-Pluto pair. A signature of this new cycle. In the spotlight must be negotiation, coalitions, compromises, women’s rights (and those of others including animals), and especially the environment. She wants fundamental changes that give power to anything ‘green’. She wants us to take responsibility for the earth. To empower women – especially older ones who have wisdom – and the disenfranchised, and to have true democracy for everyone and definitely not only for the rich! I think anyone fighting for these causes has a friend among the planets.

So what do we need to do?

Pluto and Saturn together demand that people in authority use power wisely. In Capricorn the need to take responsibility and accept reality is even stronger than usual. Laws that are inherently ‘wrong’ must be changed. Mistakes from the past need to be learned and corrected. Leadership must be powerful but transparent, and accountable. Otherwise Saturn and Pluto will force atonement. Lying will no longer be tolerated and legal procedures will attempt to uncover the truth in cases of abuse – both sexual and where power or authority are misused. It is not surprising to astrologers that Epstein, Prince Andrew, Netanyahu and Trump are all involved in lawsuits now. Saturn says – you reap what you sow! Pluto says – you can’t hide!

I will cover the areas where this conjunction of planets will be very important in a few countries, thereby offering advice for politicians in the Netherlands, the UK and the US.

Our new country logo! The Netherlands has been re branded – perhaps a pity they didn’t use us at Strut your stuff!

Saturn-Pluto fall together in the 7-8th areas of the Dutch chart, depending on which system you use. Major changes need to take place in our relationships with other countries (perhaps the reason for the re-branding as the Netherlands instead of Holland) and/or with pension systems, mortgages, legislation on death and dying, inheritances and taxes. ‘Big money’ needs to be accounted for – perhaps this means that the role of the Netherlands in tax schemes for big business will be in the spotlight and critically examined, to name just one area. Our role within the EU might need to change too and of course our relationship with the UK is very important.

The 4th area of the UK chart is triggered by this pair, so matters requiring radical change are housing, food and forms of nurturing. Keeping families together and providing safety are paramount, as is care for elderly family members. If election promises target these areas and the environment (because Ceres is definitely involved here too), the universe seems to be saying ‘yes’! Safety for women is sadly a big issue in this election. Many good women candidates have decided not to stand due to the amount of trolling, bullying and death threats they have received. This must be solved on all levels.

Also worrying is the fact that the Tories are using dodgy tactics to get attention by paying Google to promote sites called such things as www.labourmanifesto.co.uk, which is their site criticising Labour. It was launched on the same day as the Labour Party manifesto, which actually tries to address the right areas.

Lady Brenda Hale, the Supreme Court judge in the Boris Johnson proroguing case, whom I mentioned in my last Virgo post, has become a bit of a heroine of mine. The link below gives some details. She is definitely the type of woman we need for the future to solve some of the problems facing the world. A quote from the article below “She has long been breaking down barriers in the judiciary, which has struggled to cast off the perception it is an old boys’ club, overwhelmingly white, male and public-school educated.” 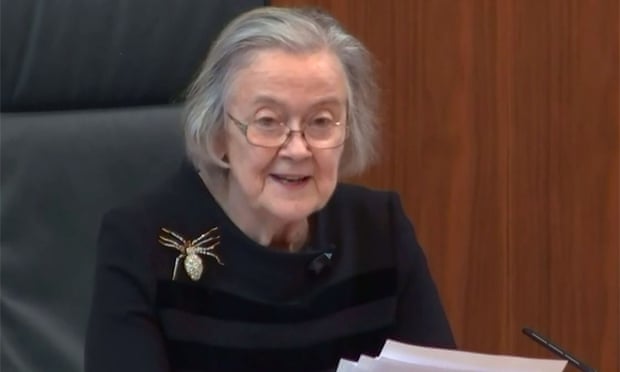 Lady Hale, well known for her brooches, delivering the verdict against Boris Johnson’s proroguing of parliament, wearing a wonderfully Scorpionic spider which sent the internet into overdrive!

This ruthless-when-crossed pair, Saturn-Pluto and not forgetting Ceres, fall in the 2nd area of the US chart. What is required here is radical changes in financial systems. Anything that is not ‘clean’ in the areas of ownership, property, assets, banks, and fair wages will be hauled over the coals. My advice here is to reform anything that takes financial power away from companies and individuals. I think investments into the environment should be rewarded by the universe. The Green New Deal seems to be on the right track. Responsible use of the earth’s resources is paramount. Saturn and Pluto suggest that plundering the earth cannot be limitless. It is time to stop, of course globally, but especially by US interests.

So what about us?

How should we use this opportunity? Because that’s what it is. Being in tune with the cosmos can bring rewards. Saturn brings rewards for hard work – it is associated with the harvest, however, together with Pluto, we must do our inner work to get these spoils. We too must use power wisely and we also must step into our power and take responsibility for our lives and our planet. What do we need to clean up and throw out of our lives? Where are we feeling dis-empowered and why?

A grown up Saturn doesn’t blame others. A grown up Pluto is not a bully. We must go for our own goals with passion whilst not destroying others or our home in the process. No-one said it would be easy – Saturn and Pluto are hard task-masters and Ceres is no fun either when crossed. But the rewards, if we can go for what we truly want to achieve, can be great at this time. Don’t miss the opportunity.

An article about Lady Hale.

The full interview with Prince Andrew. See what you think.

An explanation of the Green New Deal.

“A lie can travel halfway around the world while the truth is putting on its shoes.” Mark Twain